Can Electric Vehicles be Effective for Patrol Use 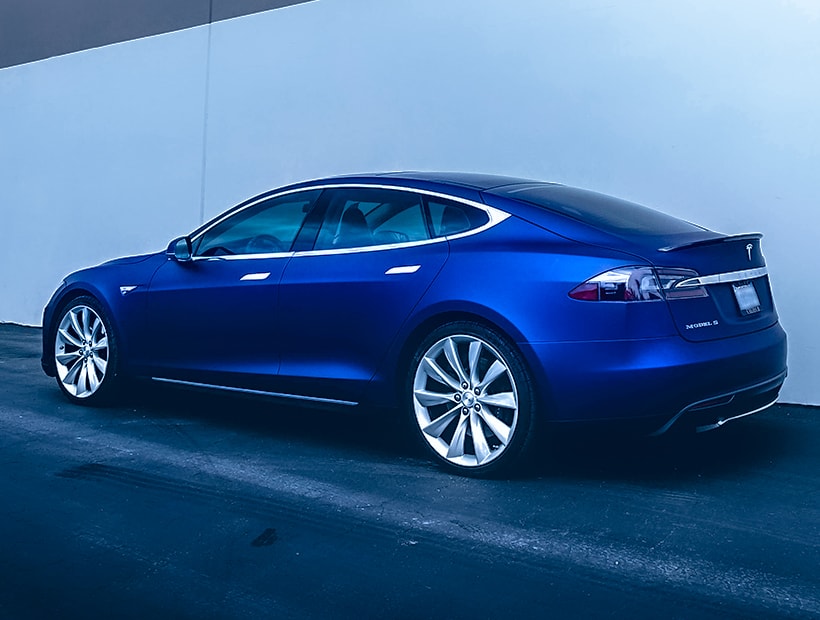 Police agencies strive for a balance of fiscal efficiency and operational effectiveness when considering new technologies. While the electric vehicle (EV) is not exactly new, its appearance has become far more prevalent in recent years. Once little more than a novelty, electric cars are increasingly mainstream and poised to replace the internal combustion engine within a few decades.

Motor Vehicles and Their Use in Policing

Over 100 years ago, then Berkeley Police Chief August Vollmer established the first version of what has become the modern patrol fleet. Previously, law enforcement performed their duties by walking a beat or on horseback. This worked reasonably well until the criminal element took advantage of the emerging use of motor vehicles in their nefarious deeds. Chief Vollmer leveraged the new technology of the day and placed his police officers in patrol vehicles. In addition to enhancing the officers’ crime-fighting abilities, the increased mobility transitioned law enforcement into more effective and efficient public service.

Today’s police leaders are no strangers to the proverbial game of cat and mouse they must play with those who commit crimes in their jurisdictions. When the police use technology to solve cases, the criminals are already working on circumventing those efforts. Conversely, when lawbreakers use a technique to further their illicit activity, the police are quick to develop tools and tactics to prevent further lawlessness.

Of course, crime-fighting is only part of the job of the modern police chief, sheriff, or other law enforcement leader. Figuring out the big picture and how an organization as a whole can be more efficient is the goal of nearly any police chief executive. The electric vehicle for use in patrol work has presented an opportunity for agency managers to challenge schools of traditional thought and examine how EV adoption can significantly reduce budgeted costs in fleet operations.

When discussing the modern electric vehicle, the Tesla brand is sure to be the prominent car in the conversation, and for good reason. Tesla has enjoyed years of success as a mass-produced EV. With Tesla’s popularity growing and other car manufacturers doing a pretty good job of playing catch-up, the use of the electric patrol vehicle in policing was inevitable.

The Tesla Model 3, already used by several law enforcement agencies, has proven itself a practical and cost-effective addition to the police fleet. As EV drivers, police officers are providing favorable reviews of the Tesla Model 3, as well as other electric cars. Admittedly, police can be a little resistant to change, and the move from gas engines to an electric cop car certainly represents a change. However, these EVs have provided the power, performance, and comfort officers expect, and many are pleasantly surprised by the experience. Some police chiefs are even reporting their officers requesting to be assigned an EV for patrol duty after driving a gasoline car for years.

While Tesla models remain a favorite in the market today, there are plenty of other electric vehicles available, with more on the way. The Toyota Prius, a mainstay in the hybrid vehicle industry, is a contender for police patrol use. While its size and power may not be suitable for every agency today, the Prius and its future Toyota siblings are sure to provide variations in the hybrid electric vehicle realm to accommodate police patrol duty.

Advantages of an Electric Vehicle Fleet

Officer Safety is Always the Priority

When asked what the important considerations are when adopting a new piece of equipment for police work, nearly any law enforcement professional will identify officer safety at the top of the list. Being a police officer is, by its very nature, an occupation replete with danger. It stands to reason safety precautions are essential in this profession. Since police officers spend a great deal of their time in a patrol vehicle, logic dictates the justifiable expectation that their cars are safe.

Electric vehicles were compared to their combustible engine counterparts by the Insurance Institute for Highway Safety and found to be equal in major crash tests. Interestingly, the Highway Loss Safety Institute found that injury claims resulting in crashes in electric vehicles were about 40% less than on the same gas-powered models. Credited largely to the weight of the batteries, EVs distribute the force of an impact differently, which the Institute for Highway Safety notes as the likely cause for reduced injuries.

After safety factors, one of the major considerations when choosing the right vehicle for a police patrol fleet is cost. Fuel, usually found at the top of the cost list, is traditionally followed closely by maintenance and durability. Specifically, how long will the agency be able to use the vehicle for its intended patrol purpose? While the duration of most gas-powered cars is measured in miles on the road, more EV adaptors are considering the hours in operation as an equally important factor. The tried-and-true odometer is probably not slated for oblivion in tomorrow’s electric vehicles. Still, calculating time-in-use is slowly changing the way a car’s value is determined.

The initial cost of an electric vehicle for policing is likely to be higher than its gas-powered alternative. For instance, while fleet pricing and government contract pricing will vary, a Tesla Model 3 will run about $38,000-$40,000, not including any police equipment. By comparison, a Dodge Charger is usually well under $30,000, sometimes hovering just above $25,000 for some models. Again, this does not include emergency lighting, radio/MDT consoles, backseat barriers, or other standard law enforcement gear.

The justification for the higher purchase price is soon realized in the savings found in what it takes to make these vehicles move. While varying studies are comparing the long-term savings of EVs over gas-powered cars, Officer.com recently highlighted the Bargersville (Indiana) Police Department’s transition to the Tesla Model 3. A small agency in terms of personnel, 12 sworn officers, but an obvious innovator as an EV adopter, the chief reported significant savings since Tesla hit their fleet. In 2018, Bargersville P.D. spent about $60,000 in fuel. In 2021 the agency’s fuel budget was $25,000.

Additional cost savings result from the reduced maintenance required with electric vehicles. With far fewer moving parts, the EV does not require oil changes and other types of upkeep typically associated with an internal combustion engine. Also, coolant fluids and brake systems tend to last much longer in an electric car due to advances in technology such as regenerative braking. Of course, some things remain unchanged between the two vehicles: tires, shocks, and washer fluid just go with the territory of vehicle ownership regardless of what propels them.

Challenges of an Electric Vehicle Fleet

When considering the use of electric patrol vehicles, one of the first concerns of a police chief or other agency head is likely to be any challenges relating to charging. In reality, the challenges are usually more about the uncertainty of the process than the practical application of getting and keeping an EV charged. You can almost imagine a similar form of skepticism when gas-powered cars were taking over for police patrolling on horseback. Running out of gas and the duration of an electrical charge are both valid concerns, but the former turned out to be far less of a challenge than originally believed. The EV driver is poised to have that concern relieved as well as charging availability expands.

In reality, many of today’s electric vehicles can easily hold enough of a charge to allow for the average police patrol shift. With estimates of between 250 and 300 miles on a full charge, EV duration can usually cover most municipal patrol duties on a single charge. Granted, some rural or larger jurisdictions may require a mid-shift charge, but just as officers in a gas-powered car have to refuel, those in the electric vehicle may need to stop and replenish the EV battery.

The New EV Drivers: What do Police Officers Think?

Another challenge to an EV fleet is officer buy-in. While the generation of cops coming out of the police academy today may have little issue with an electric patrol vehicle, seasoned officers may not be as easily sold. Many law enforcement officers are accustomed to the power and sound of the V8 engine found in the Ford Crown Victoria, once the staple of police cars, or its generally accepted successor, the Dodge Charger. Police chiefs are finding that the EV switch is not unlike other forms of technology. At first, there is some resistance, but eventually, the advantages become clearer. At that tipping point, chiefs will start to have their more experienced officers requesting the electric vehicles, maybe even pulling the seniority card and making the rookie drive the old, gas engine patrol car.

The Future of Electric Vehicles in the Police Fleet

As the electric vehicle becomes more prevalent in society, their natural progression to increased use in commercial and governmental fleets is inevitable. Electric vehicle charging stations are already sharing space with traditional fuel pumps at convenient stores, and their lack of environmental pollutants is also a factor in their inclusion in parking lots, industrial fleet yards, and homes. As Chief Vollumer and his contemporaries initiated the use of the internal combustible engine over 100 years ago, today’s law enforcement leaders are once again leveraging technology through the increased use of the electric police cruiser.

Let’s help you get the right lighting and warning equipment for your Law Enforcement emergency vehicle fleet. Click here. 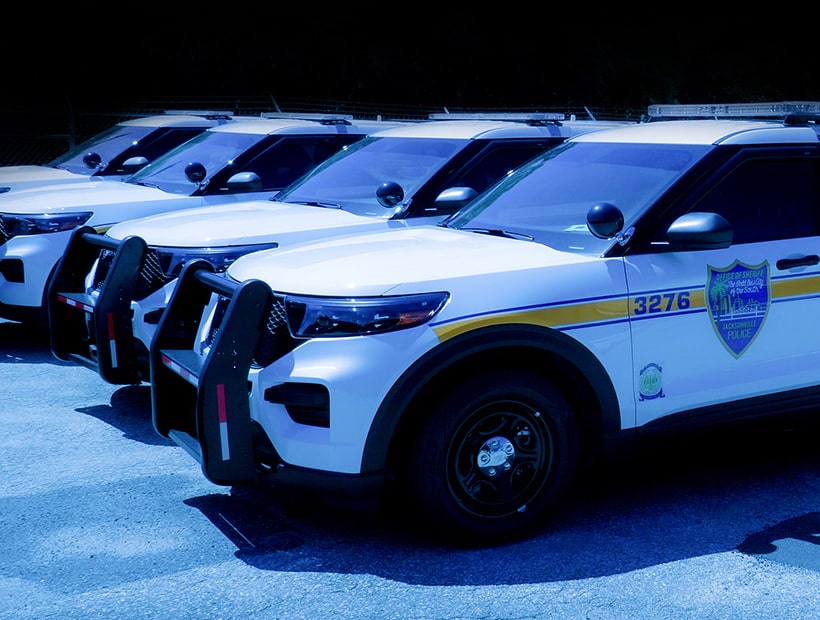 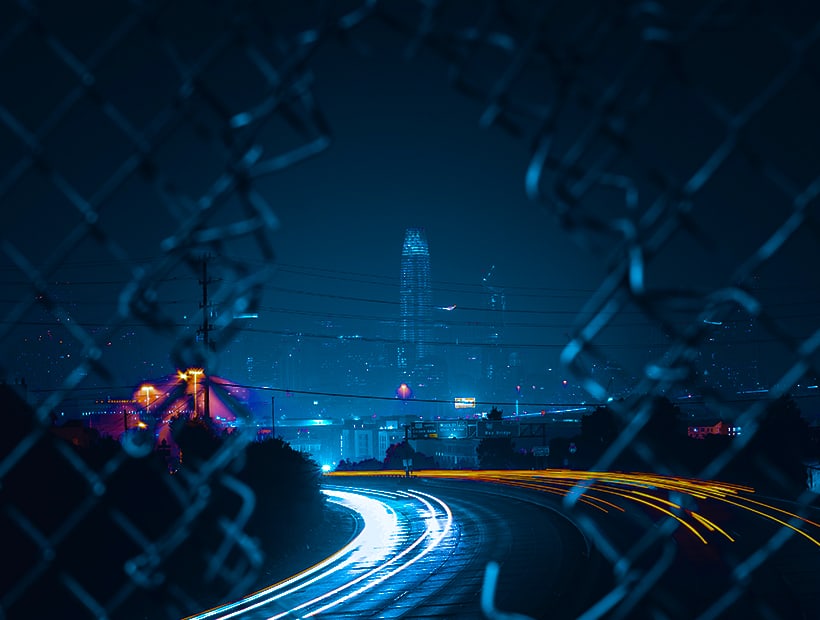 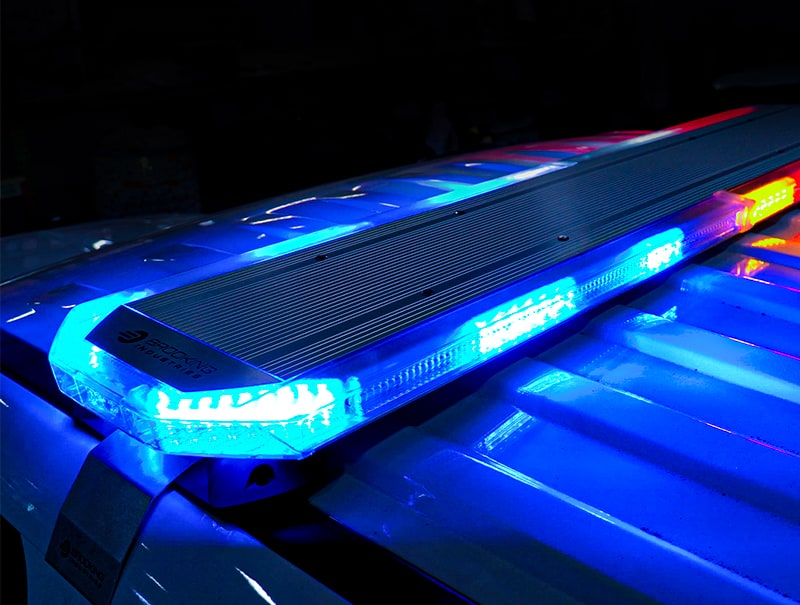 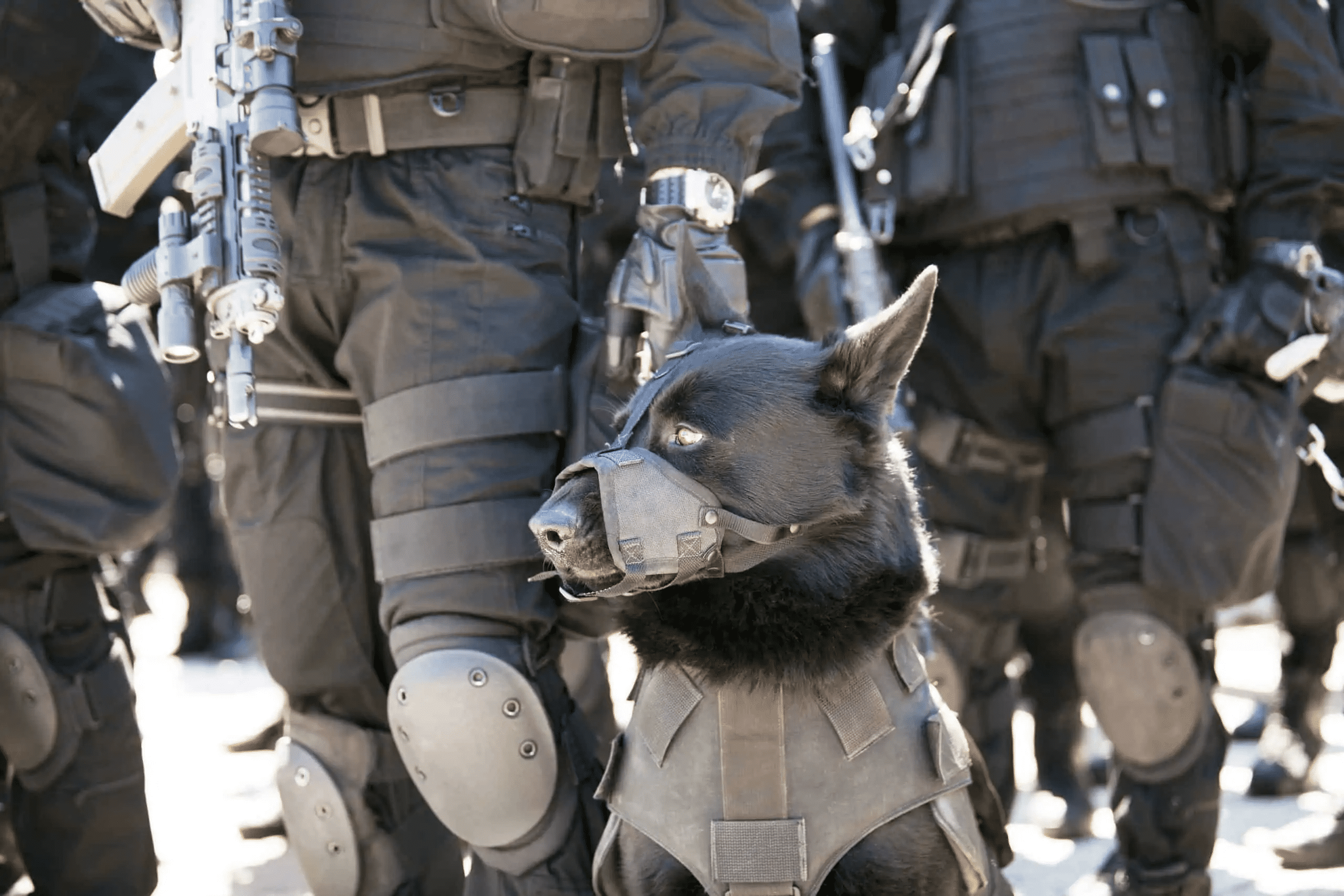 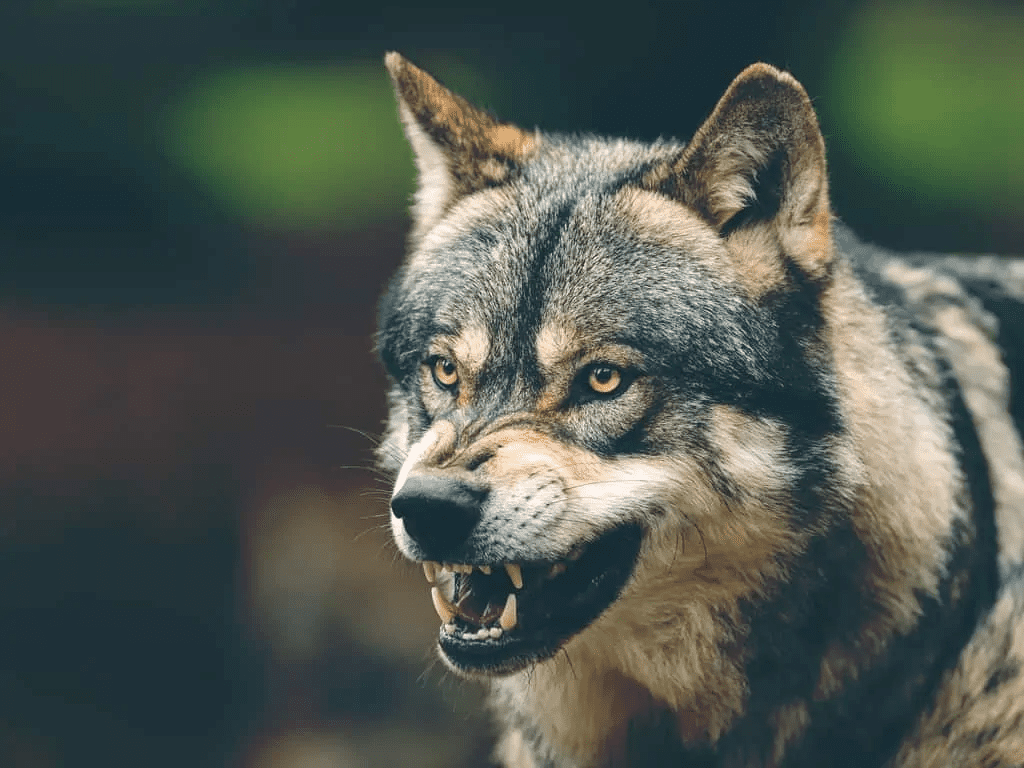